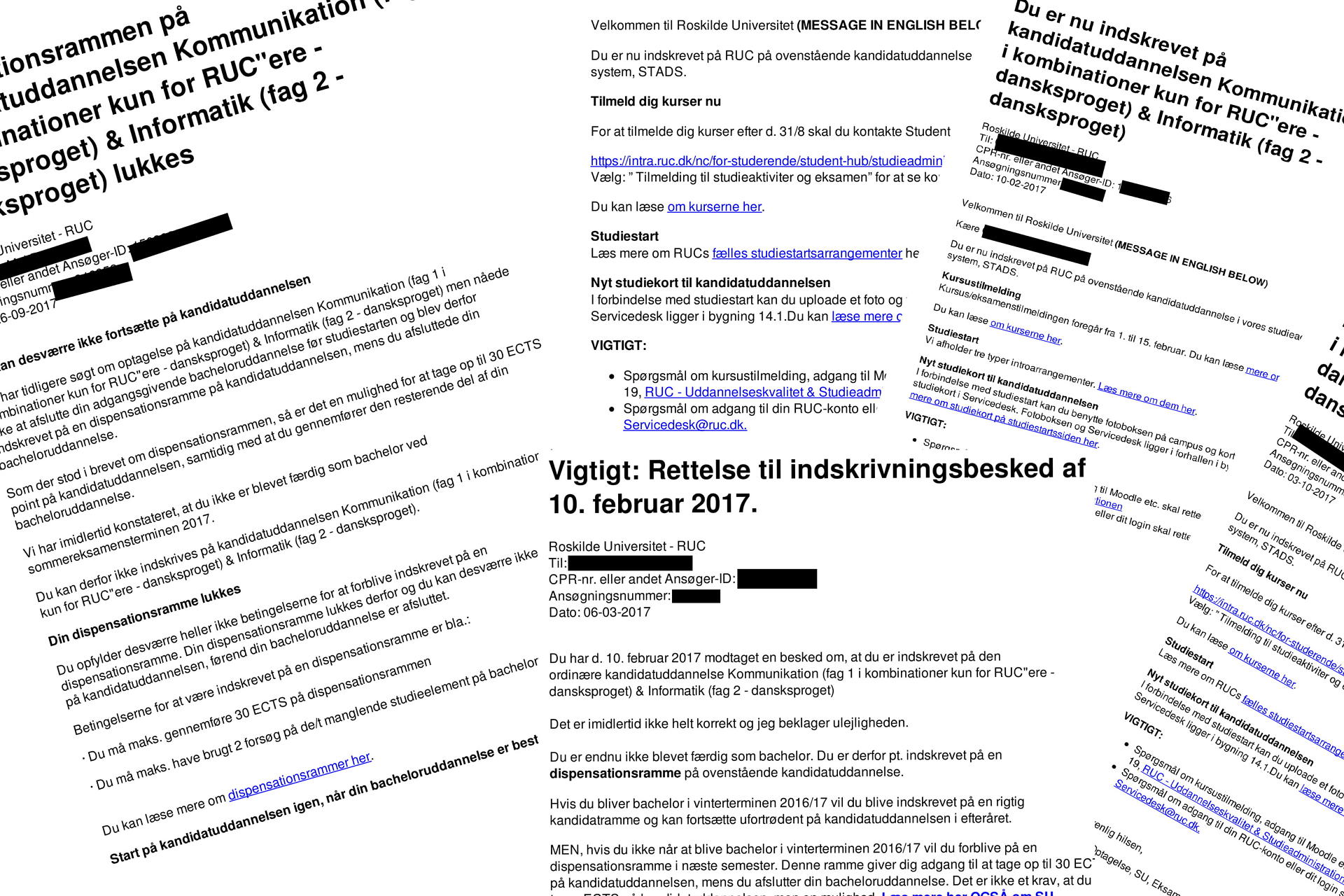 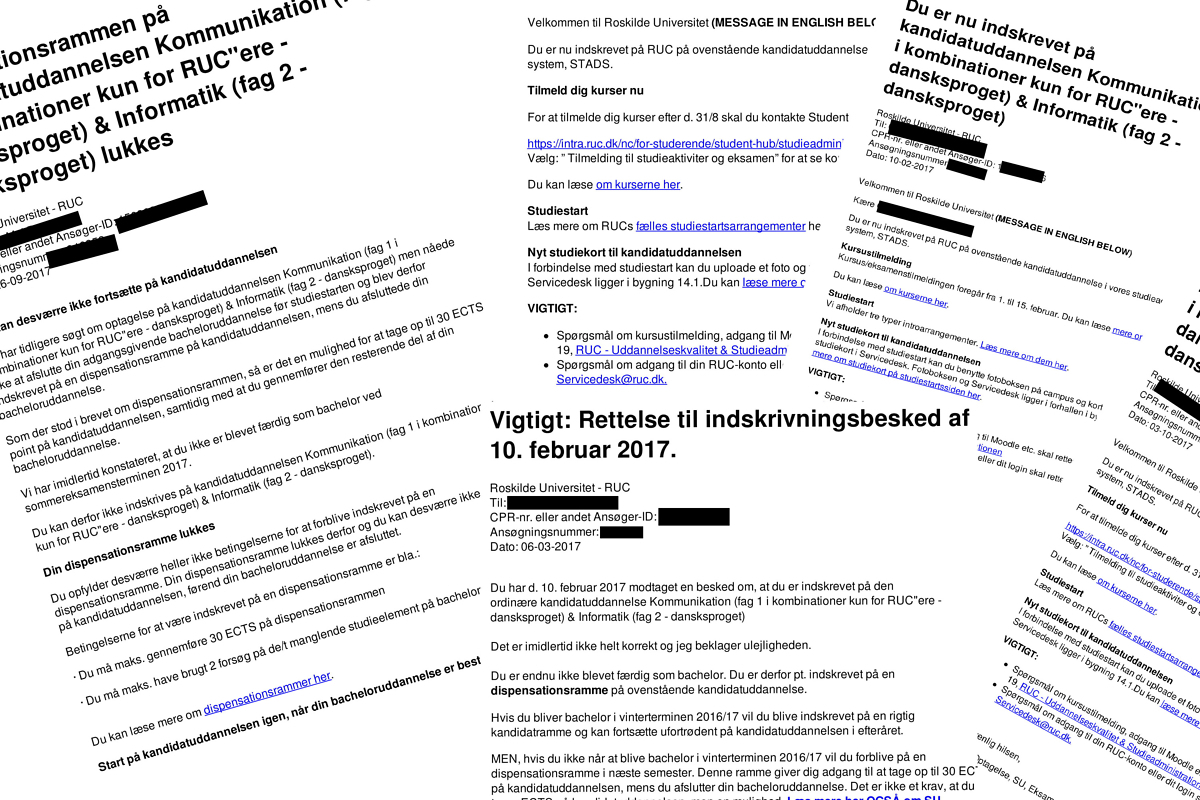 When the administration fails to administer

A
Aktuelt
4 min
RUC decided more than a year ago to lay off house secretaries with two purposes in mind. The malign purpose was to cut costs and the benign one was to ensure standardised student guidance and procedures. Student accounts now reveal how the changing face of the administration has created numerous blemishes. These range from contradictory e-mail responses to a confounding number of contact persons, in addition to stories of students who are pushed out of courses and even from the university due to administrative errors. 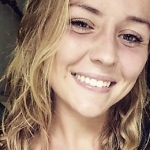 One and a half year ago, RUC’s top management made a decision. Time was up for centralising the study administration instead of having a house secretary allocated for each house.

RUC’s director of studies, Maria Volf Lindhardt, acknowledges the economic rationale behind this decision. Pointing to a report made by a consultancy firm,  Struense & Co., she states that »a great deal of money was to be found by centralising and standardising.«

The director of studies nevertheless stresses that they had a concurrent goal to make the handling of issues and student information more uniform.

»The individual student must not be tossed around. If a student approaches us with three questions, then we distribute them further to those who can provide the right answers. The secretary who is sitting at the desk won’t be the same every day, but she is still receptive to your questions, which then are distributed to the appropriate persons.«

But the goal of uniform procedures is yet to be reached, indeed far from. Christian Banja has felt the consequences. He is doing informatics and business studies at sixth semester. Involuntarily, he had to extend his studies because of administrative chaos.

It all started at second semester when he and some of his fellow students chose to shuffle the composition of their bachelor programme. After consulting a study counsellor at subject selection day, they rearrange the sequence of their courses.

According to the curriculum, some are basic courses and some are electives. With blessings from a study counsellor, they interchange a standard basic course with another course that normally is an elective. Everything was fine and dandy until they reached fifth semester. When they had to choose two electives, the administration thought that they had already taken one elective. By taking one extra elective, they broke the rules although it was in fact a basic course.

They were subsequently thrown out of the course despite attending it for some time. Moodle was no longer available as well, disabling them from accessing course literature and presentations.

Christian and his mates approached the desk at the study administration. Here, they were told that they had breached the curricular rules, contrary to the study counsellor’s response.

»Whose fault is it? It is a self-study after all, so maybe we should have read through the curriculum ourselves. But still, we were assured by the study consellor that there were no issues with our choice.«

The only option is to take another course that does not run during his sixth semester but only a during seventh one. Increasingly, it becomes clear that Christian could look forward to a forced half-a-year long leave.

Christian Banja turns stubborn. He marched to the study administration once again, now encountering a new secretary who writes down his grievances on a post-it for someone else to respond.

»She throws it in a pile amongst thousand other post-its. Of course, I asked when I could expect an answer but she knew nothing,« he says. Christian Banja then contacts the study counsellor from HumTek who had consulted him back in second semester, hoping to get his case revisited.

When Christian finally gets to meet with him, the study counsellor expresses that he has gotten to the bottom of this by talking to the administration. They admit the rules for HumTek electives are not stated sufficiently clear at kursus.ruc.dk. Yet, nothing can be changed anyways. They told him that seventh semester is still a reality.

A friend of his is going through the bureaucratic mill. He gets in contact with a former HumTek secretary who now works in the central study adminstration. He recounts the issue for her. Two hours later, he receives an e-mail in which he is told that the problem is solved.

Emboldened with new vigour, he now quickly forwards his friend’s e-mail to the study administration in the hope of moving the course to sixth semester. A brief moment later, an e-mail pops up that curtly states: ’Hi Christian. Your course has been moved.’

Thrown out of RUC – by mistake

While Christian Banja was just about to take a forced leave, Celine Dønvang experienced to be kicked out of Roskilde university owing to an administrative error.

She fails her exam in one bachelor course in informatics and communication studies and thus technically needs five ECTS points in order to begin her master’s. She approaches the administration. They guarantee that she can retake the failed course during her graduate programme.

No bureaucratic bumps, no cracks, no twisted turns. Celine smoothly commences her master’s studies in February 2017. A month later, she receives an e-mail declaring that she is conditionally admitted to her master’s.

Or so she thought.

It appears that the administrative IT-system is not capable of discerning between Celine’s ad-hoc course and the rest of her graduate courses. She continues her studies until September when she receives yet another and contradictory declaration from the study administration that she is dismissed from RUC. She has no other choice than to fastidiously procure evidence for her accumulated ECTS points from her bachelor’s and from the first semester of her master’s programme. Since she is technically kicked out, she cannot access material on Moodle.

»It was horrible. I had to construct separate schedules for each semester of which I then colour-coded for each subject. I wrote down all the courses that I have passed and retaken and failed, in addition to designating how many points I’ve gotten from these courses separately,« she explains.

Celine hands in her set of schedules she has studiously designed, and three days pass without any notifications. Receiving no response, she feels an urge to call the secretary responsible for graduate courses in informatics. In vain. The secretary merely pushes her further down the bureaucratic mill, Matriklen, which is the study registry branch of RUC’s administration.

Luckily, she is informed that her problem has been fixed at Matriklen. In the early days of October 2017 Celine receives a message that she is now admitted to her graduate studies once again. Even though the chaos has now faded away, Celine remains embittered about the whole situation.

»I’ve nearly lost faith in any piece of information coming from the administration. I want confirmation of my continuation, because I constantly get new information, which is frustrating. If you aren’t aware of such things, it can really go wrong. I’ve been highly alert these days and I will continue to be alert for the rest of this semester. You never know,« Celine says.

Everything was fine and dandy until they reached fifth semester.

No comments on the specific cases

Maria Volf Lindhardt is reluctant in commenting on Christian Banja’s and Celine Dønvang’s specific cases, but she does grant that »cases like these are inevitable.«

»I cannot exclude the possibility that some students have fallen out of the new system, but that actually happened in the old system as well. I’d even dare to say that we have bettered the handling of student issues after the recent organizational reshuffling.«

The objective, according to Maria Volf Lindhardt, is to offer one single gateway to the administration for students, something that should be beneficial. »We still have a long way to go, but that’s the vision,« she says. She believes that a case like Celina’s could be seen from an alternative perspective.

»It is plausible to suggest that we’re dealing with an old error of registration. Excluding her from the system does not necessarily imply that everything is a mess. Rather the contrary could be argued, namely that we follow the rules. When we then recognise the registration error, we can re-instate her in our system,« the director of studes explains.

Christian Banja and Celine Dønvang miss the more personal contact associated with the house secretaries. They solved issues in a quicker and easier manner because you did not have to recount your issue, as you have to do in the current system every time you meet a new bureaucrat. But the change towards a more impersonal system does not need to be a bad thing, according to Maria Volf Lindhardt.

»Some students mention the impersonal features of the StudentHub. This is indeed true. However, now the students are treated more equally, regardless of which sort of education they are pursuing. Overall, the aggregate learning curve for the central study administration is greater than the sum of its previous house secretaries, something that will benefit all students,« she states.

Barred from the academic environment

»I was yellow,« states Merete Breilev. Yellow is the colour of e-mails coming from students studying journalism that are received by the central study administration.

From the 1st of February onwards, Merete Breilev was responding these e-mails. But in December, she quit her job after 21 years of loyal duty for the administration to start anew at VUC in Copenhagen, an educational institution for adults.

17 of those years were spent in the service as a study secretary for journalism studies. Her office had been decorated with a sign from a train station saying ’Odense’. It had been given by the students she served for the very reason that her office resembled the busyness of a train station in rush hours. It was the meeting place for students and academic colleagues alike.

In a mail from December, she was determined: administrative centralization drove her to resign. She had been moved from her office in building 40 to a massive room filled with paperwork with red tape shared with other study administrators like her – distant from the the daily life at the institute of which she administers.

»It was highly unsatisfactory. So many issues could be straightened out by people having quick face-to-face interactions before such issues grow into unmanageable proportions,« Merete Breilev says.

Not only was it the face-to-face contact with students that Merete Breilev found reasonable. Also the personal contact with the academic faculty was desirable.

»As another part of the budget cuts, RUC chose to sell buildings, which has resulted in a higher frequency of classes during inconvenient times of the day. This has generated a lot of frustration amongst lecturers. Previously, we could have handled the extra heat more smoothly through face-to-face interactions as we would be working closer to one another. Now, 14-15 mails could easily ping-pong between us with each round of mails increasing the level of conflict risk. It contributes to an unwholesome ‘us-versus-them’ culture between the academic and administrative staff,« Merete Breilev expresses.

Director of studies, Maria Volf Lindhardt, emphasises that the transition has been exhausting for the staff on RUC. However, she also believes that a new community must be constructed out of the administrative ashes with a distinct and strong identity.

»It may not be a better community, but at least it is a community in which they feel comfortable. But of course, we should not forget that such a large change brings sorrow when the administrative staff gets divorced from the dynamics and inspiration derived from the academic environment,« she concludes.

Translated from Danish by Tobias Lanzky