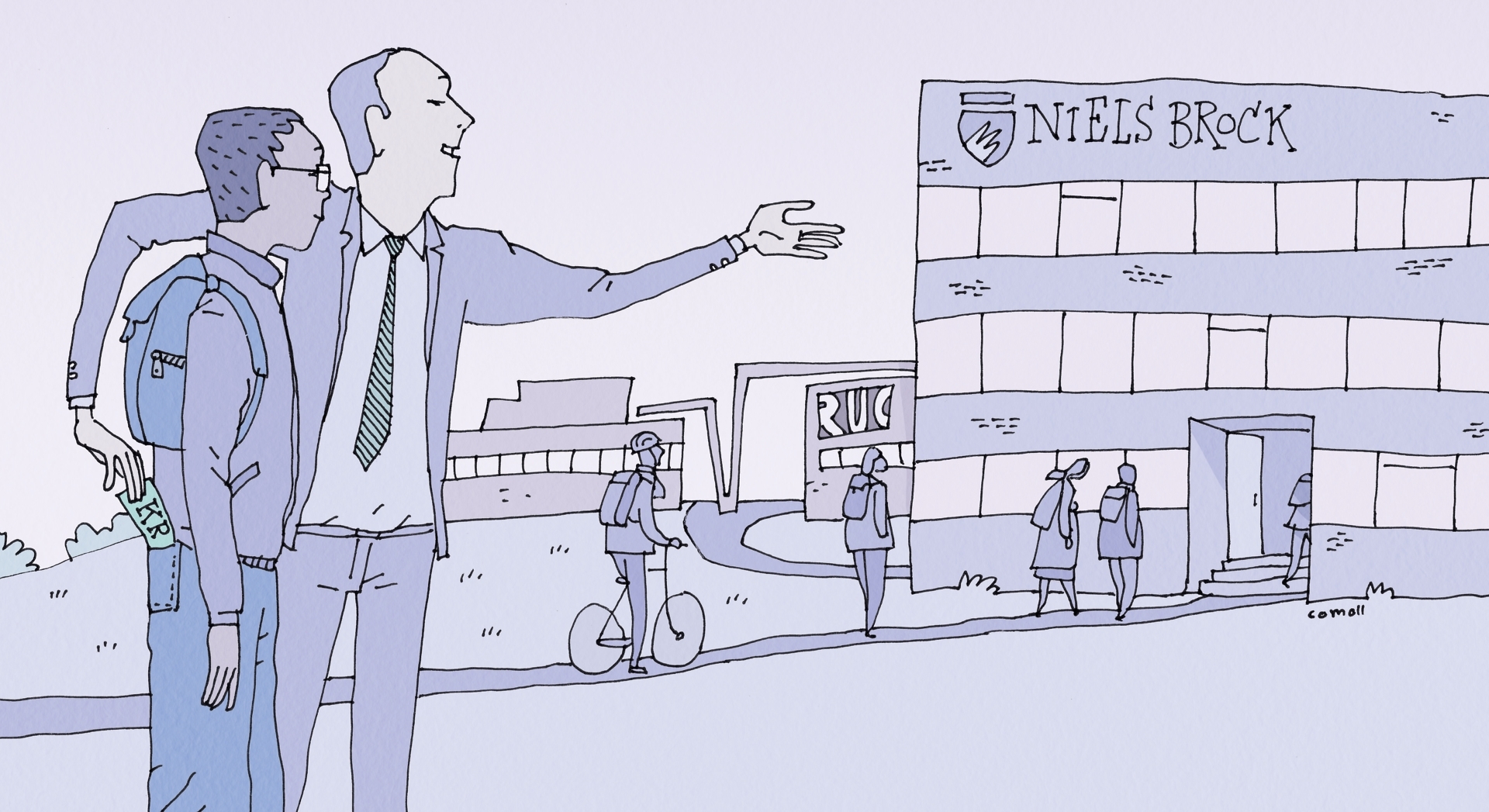 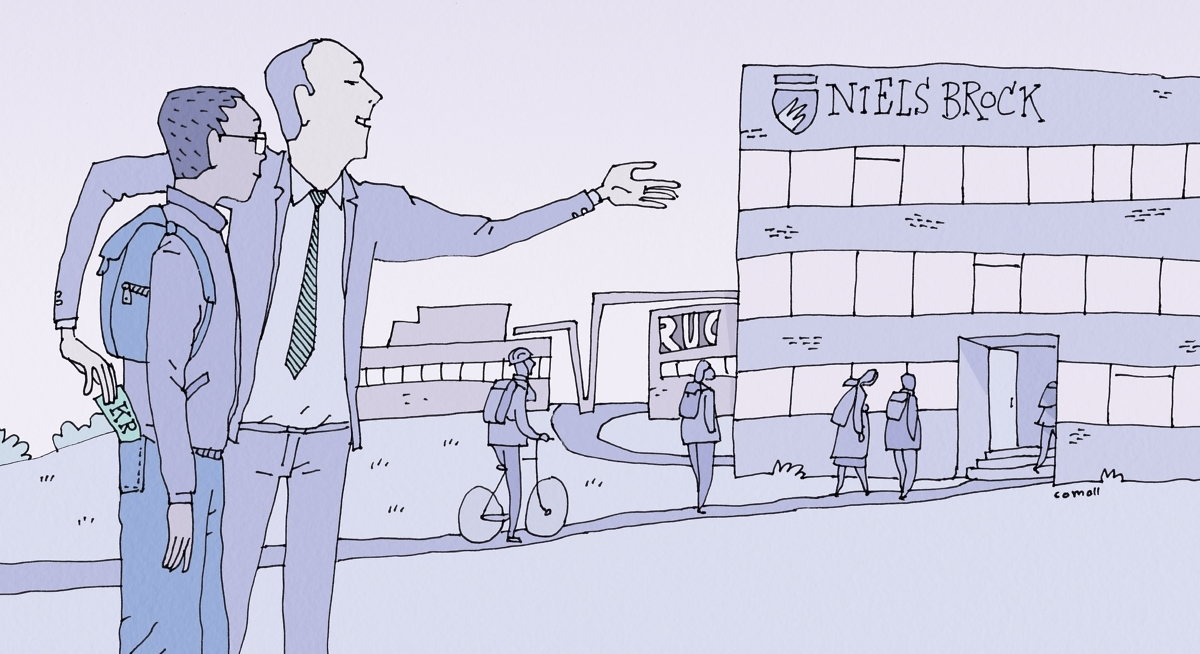 Nepalese agencies recruit students for Denmark – many of them attend RUC

A
Aktuelt
8 min
Illustration: Ole Comoll Christensen
Danish educational institutions are paying Nepalese agent to recruit students for Denmark. Once they have completed a qualifying education at for example Niels Brock or at Erhvervsakademi Sjælland, they make for RUC where they now form one third of the international post graduate students. 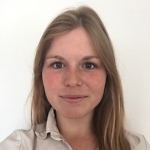 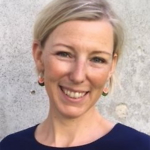 Nepalese agencies are clearing the way to RUC for young, hopeful students who dream of getting an education from a western university. RUC has become so popular among Nepalese students that they now form one third of the international post graduate students, at some educations even half of the class.

»There seems to be a highway to RUC cleared by agents planting ideas into the students’ minds. Quite often their subject knowledge is less than adequate; they are simply neither equipped for or ready to take a Master’s degree,« says Jacob Dahl Rendtorff, professor of philosophy of management the Department of Social Sciences and Business at Roskilde University. However; he emphasizes that he has a favourable impression of a number of Nepalese students who are both very bright and diligent.

Niels Brock is indirectly paying for recruitment of students for RUC

Jacob Rendtorff’s assumptions on the use of agents are consistent with what the Nepalese students unveil about their way to RUC.

In cooperation with the daily newspaper Information RUC Paper has established that there are more than 13 agencies that on their website are promoting their ability to send Nepalese students to Danish educational institutions. Furthermore, an anonymous representative adds that several Nepalese agencies are cooperating with agencies in India which are sending even more students to Denmark than the Nepalese. Not one Danish university has admitted that they are in close cooperation with agencies. Some of the 13 agencies are in close cooperation with Niels Brock, Erhvervsakademi Sjælland and VIA University College, among others. Niels Brock’s agent, Rain Education Nepal, reports that the bulk of their student will later on find their way to RUC.

»There seems to be a highway to RUC cleared by agents planting ideas into the students’ minds. Quite often their subject knowledge is less than adequate; they are simply neither equipped for or ready to take a Master’s degree.«

Jacob Dahl Rendtorff, professor of philosophy of management the Department of Social Sciences and Business at Roskilde University

»It can very well be a lengthy and complex process to apply for an education in Denmark, and here lies our main relief effort. Many of the students do not know anything about Denmark or about the possibilities there, so we give them this information. Even though our key collaborator is Niels Brock most of our students later on go to RUC for further study and a Master’s degree,« says Bidur Thapa, CEO at Niels Brock’s primary agency in Nepal.

Helle Rod Søgaard, head of International Education & Mobility emphasizes that there is no cooperation between this agency and RUC.

»We get contacted by various agencies on a regular basis; we are, however, not interested in using active recruitment or to have a preference for a specific nationality. We want first-rate students and those who on their own initiative have investigated in how a Master at RUC differs from other educations well-known to them.«

Helle Søgaard has no knowledge of which institutions the students typically come from. She states, however, that at RUC they are well aware of the fact that some institutions offerring qualifying educations make use of agencies in order to recruit students.

Even though neither RUC nor any other Danish universities are in close cooperation with agencies it is still a lucrative business to be a Nepalese education agent. Niels Brock has declined to give RUC Paper access to records on the cooperation agreement between them and Rain Education Nepal; however their agreement template reveals that the agent normally will receive a commission that corresponds to 10 or 15 percent of the tuition fee. That is between 8,600 and 22,000 Danish kroner annually per active student at Niels Brock. By comparison a Nepalese annual salary is approximately 1,500 Danish kroner.

That amount solely derives from students accepted at Niels Brock, but Rain Education Nepal reveals that they are “very keen” on helping students get accepted at other Danish educational institutions. These students pay a fee to get the agency’s assistance with the application process. Rain Education states that the students pay in the region of 600 Danish kroner for that service, but several Nepalese students have confided in RUC Paper and told us that this amount is way below what they have paid other agents.

»I have heard that students have paid between 1,000 and 8,000 Danish kroner for assistance with applications, for example at Niels Brock,« says a 32year-old Nepalese man who wants to stay anonymous. He came to Denmark 12 years ago to study at Erhvervsakademi Sjælland, with the assistance of an agent; however when he later wanted to return to Denmark to study at SDU he applied without any help from the agent.

»At that time I knew the system so there was no need to pay an agent an excessive sum of money for services I could deliver myself,« he tells.

A lengthy debate and well-known issues

The fact that agencies are recruiting Nepalese students is neither new nor a secret here in Denmark for it has quite often been the pivot of the debate. As early as in 2008 this phenomenon was discussed since Kristeligt Dagblad revealed that several educational institutions complained that many students lacked in subject knowledge, or just wanted to go to Denmark to get a job. The Department of Education and Science initiated a thorough investigation and in cooperation with the Danish Embassy in Nepal they uncovered that the agents conducted fraudulent behaviour in their assistance with qualifying diplomas.

Also in 2016 the Nepale students’ motive for coming to Denmark came on debate when Politiken unveiled that Danish folk high schools were struggling with vast drop-out rates among Nepalese students. They registered, but never turned up or they only participated for a few days in the induction programme.

The debate flared up again in February 2018 when the Danish Economic Council of the Labour Movement published their annual statement. It showed that Nepalese workers are the most underpaid in Denmark since their average salary is 12,000 Danish kroner for 21 working hours per week.

Karen Valentin, associate professor in Anthropology of Education and Globalization at Danish School of Education, Aarhus University, has for several years carefully monitored the debate as part of her scientific research on Nepalese migrants’ living conditions in Denmark. She levels criticism against the media for painting a one-sided picture of Nepalese students, and she emphasizes that the debate should also focus on the many students who sincerely want to study and to work for a future in Denmark.

»The agents are just a tool the students use in order to find their way to Denmark. The media make a vulgarization by claiming that they only come here to find a job. The vast majority come here to study; however, they are deeply dependent on a job to finance their education,« says Karen Valentin.

She points out that in spite of criticism and lengthy debates concerning the Nepalese students’ motives for studying in Denmark, the students’ sincerely want to come here to study.

Denmark is a gateway to 26 countries

The agencies dish up with innumerable arguments for choosing Denmark when students dream of studying abroad, says Prekshya Lamichane, Nepalese journalist. She works at the NGO Social Welfare Association of Nepal; however, RUC Paper succeeded in inciting her to visit Rain Education Nepal, Niels Brocks agent.

Afterwards she sent us an email where she states that this organization tell the students that Denmark is a gateway to 26 European countries and that they will benefit immensely, both personally and professionally, if they choose to study in Denmark.

»They also let them know that they may apply for a residence permit after living in Denmark for 7 or 8 years. According to Rain Education many students are drawn to Denmark because there are not the same stringent requirements on documentation for self-support as there is in Australia,« Prekshya Lamichane writes in her email.

However, this information is not quite up to date. In 2015 the rules for obtaining a residence permit were altered which particularly affected international students. Now you can apply for a residence permit after three years in Danmark with full employment. Earlier, taking an education was equivalent with full employment; however, this was changed in 2015. Furthermore students must present financial documentation, but if they are studying at an institution that charges tuition fees it will suffice if the student can provide documentation for having paid the tuition fee for the first semester.

In spite of a two-week correspondence with Niels Brock they have declined to contribute to this article.

This article is written in cooperation with the daily paper Information 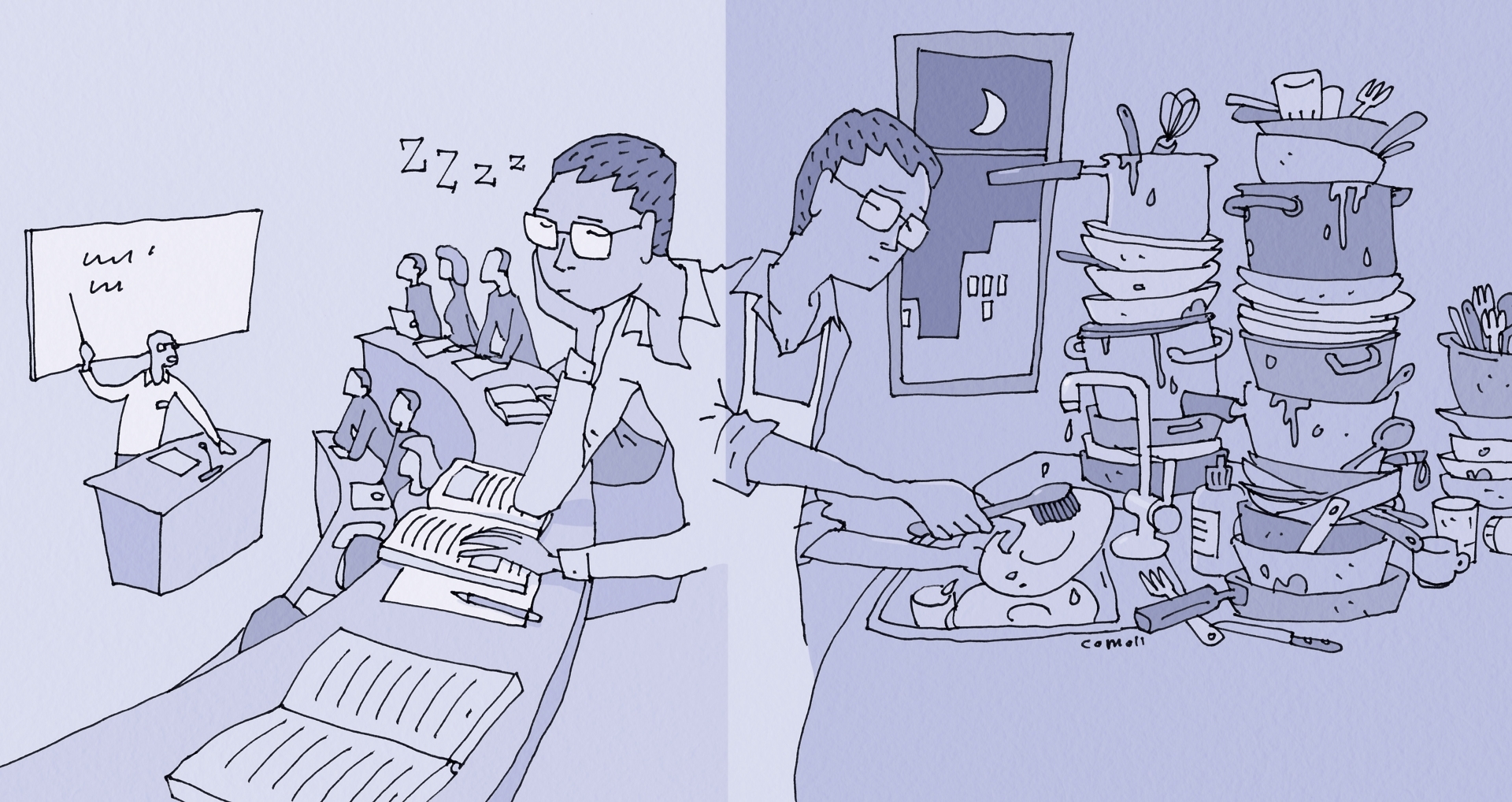 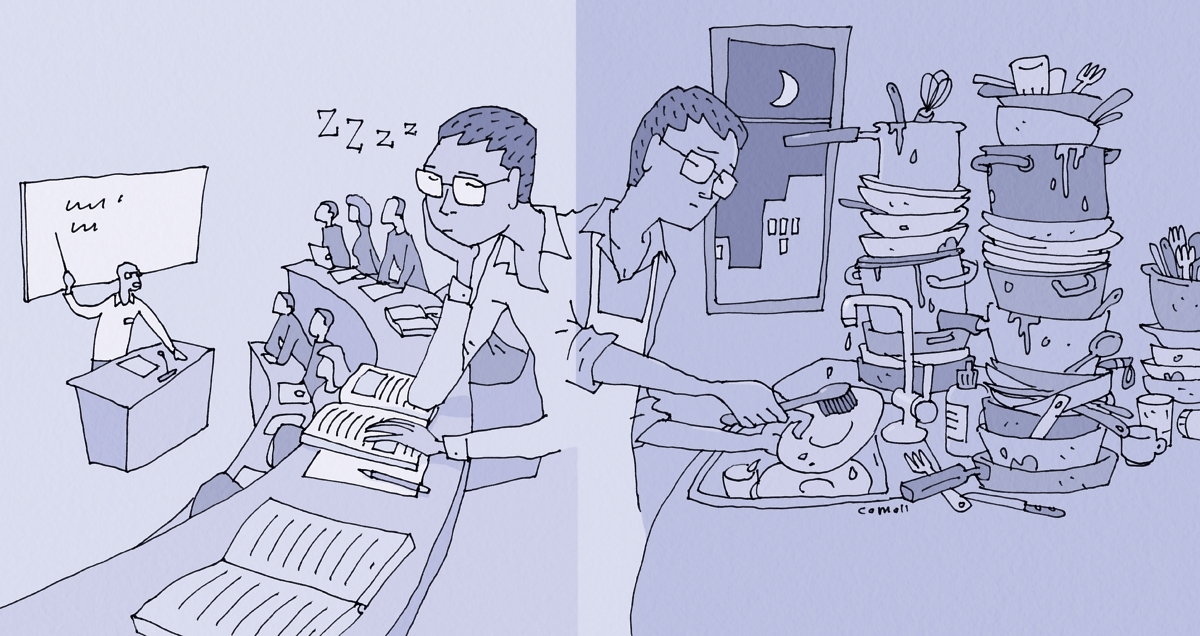 A student's life with underpaid jobs and lousy working conditions